COS says recovering grizzly population could lead to more sightings
May 1, 2020 5:40 AM By: Brandon Barrett 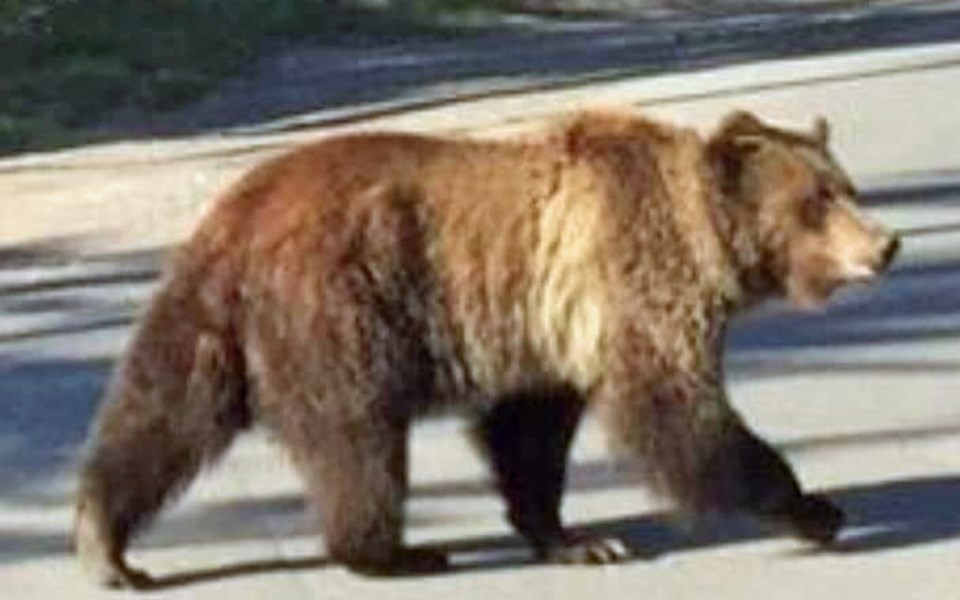 A grainy photo of a grizzly bear that the Conservation Officer Service said was taken on April 29 in Whistler Cay. Facebook photo / Colin May

The Conservation Officer Service (COS) is urging the public to secure bear attractants after a grizzly was spotted in a residential area of Whistler on Wednesday, April 29.

“The important message for us is the same for Whistler’s black bears,” said Sgt. Simon Gravel with the COS. “We don’t want those grizzlies accessing attractants. There’s about eight or nine black bears active in that same area where that grizzly was seen, and it is as important for us to talk about black bears and attractants as it is for our grizzlies.”

The bear was reportedly seen on Crabapple Drive in Whistler Cay*, a not altogether surprising spot for a grizzly to be seen so early in the season, explained Johnny Mikes, field coordinator for the Coast to Cascades Grizzly Bear Initiative.

“The [grizzly] bears we have closest to Whistler all live on the west side … So this bear almost certainly came down from the Rainbow area or the Callaghan looking for food,” he said. “When you go down to the foot of Lorimer towards Crabapple, it’s along that stretch of the River of Golden Dreams and so the valley bottom is fairly lush, early-season habitat. You’ve got skunk cabbage growing, you’ve got vegetation coming out first there in that area, so if a bear comes down from the mountain, it’s not an illogical place for it to be.”

A photo of the grizzly made the rounds on social media, and the COS has confirmed that the image is real after speaking to the photographer. Gravel claimed the shot was taken on April 29 during a brief window of sunshine on the otherwise grey, rainy day.

While it’s rare to see grizzlies in inhabited areas, Gravel said the COS has been expecting a rise in sightings as the local population has grown in recent years.

“Obviously, grizzlies are on the move and it was expected that we would start seeing grizzlies more in residential areas in Pemberton, in Whistler and in Squamish. That’s been a discussion for many years and now we’re starting to see that,” he said.

Mikes added that the lack of activity due to the COVID-19 crisis could be another factor, emboldening the bear to venture further into the valley that it normally would.

There are an estimated eight adult grizzlies living in the Callaghan area. A 2012 government report estimated there were 59 bears in the larger Squamish-Lillooet grizzly bear population unit, but biologists believe that the population has increased somewhat, with known success of females having cubs, including immediately west of Whistler in places like the Callaghan and Soo Valley.

Earlier this month, Whistler’s council endorsed the RMOW’s grizzly conflict mitigation strategy for the community’s Alpine Trail Network, which opened to much fanfare in 2017. The following summer, parts of the network were closed after two separate groups of hikers had run-ins with grizzly bears.

“The bears are coming back in numbers and then we’re building trails into the alpine, so it’s not surprising that we’re going to see them and we’re going to have to work around them,” Mikes said.

While it’s important to stay vigilant in bear country, Mikes said spotting a grizzly is no cause for panic.

“It’s prudent to be a little more aware that we have had a grizzly here and we could have it again, but there’s no reason to freak out,” he said. “Fundamentally, it is a wonderful sign that we have these wonderful creatures in the wild still living in proximity to us. We just need to keep the town clean, be alert and aware and enjoy the fact that they’re around.”

The COS is asking the community to manage all attractants around their homes. This includes ensuring that garbage and pet food is properly stored, birdseed is removed from feeders, and outdoor barbecues are properly cleaned—a persistent issue for the COS recently.

“We have had a lot of reports of barbecues being attacked, so maybe we can put some more emphasis on that,” Gravel said. “People sometimes are a bit complacent on cleaning their barbecue properly, burning off all the leftovers in it and removing those grease tins under it. That seems to be the main attractant we’re dealing with this year at this stage so far.”

Cats should be supervised if let outside, and dogs should be kept on leash outdoors at all times.

“Dogs have to be on leash in bear country. There are no exceptions—grizzly bears or black bears. In the past we lost some black bears because of dogs. The bears are getting harassed by dogs off leash, and then eventually they just learn the behaviour to turn around and … start attacking dogs,” explained Gravel. “Obviously, when we have a bear learning that behaviour, like automatically chasing and attacking dogs—even dogs on leash—then it becomes a huge public safety concern for us, and unfortunately, it’s hard to reverse this learning behaviour for us.”

Whistler’s Animal Responsibility Bylaw mandates that dogs be on leash, except when in an off-leash park, and owners can also be fined under the Wildlife Act if their dog is found chasing wildlife.

As always, bear sightings can be reported to the COS RAPP line at 1-877-952-7277. Mikes urged the community to report a grizzly as soon as it’s spotted to allow for early intervention, if needed.

“The best thing you can do for the bear is call the Conservation Officer Service, call the RAPP line, and through that the word will get out to the muni, to bylaw staff, to everybody that there’s a bear there and hopefully word will get out, education can be done and people can keep that bear safe,” he stressed. “Probably the worst thing you can do for that grizzly bear, or any grizzly bear you see, is not call the Conservation Officer Service.”

For more information on mitigating conflict with grizzlies, visit wildsafebc.com/grizzly-bear.

An earlier version of this article incorrectly stated that the bear was seen in Whistler Cay Heights, not Whistler Cay.