Witness recalls scary incident that saw a team of bystanders pull the man to shore
Jul 29, 2020 10:18 AM By: Megan Lalonde 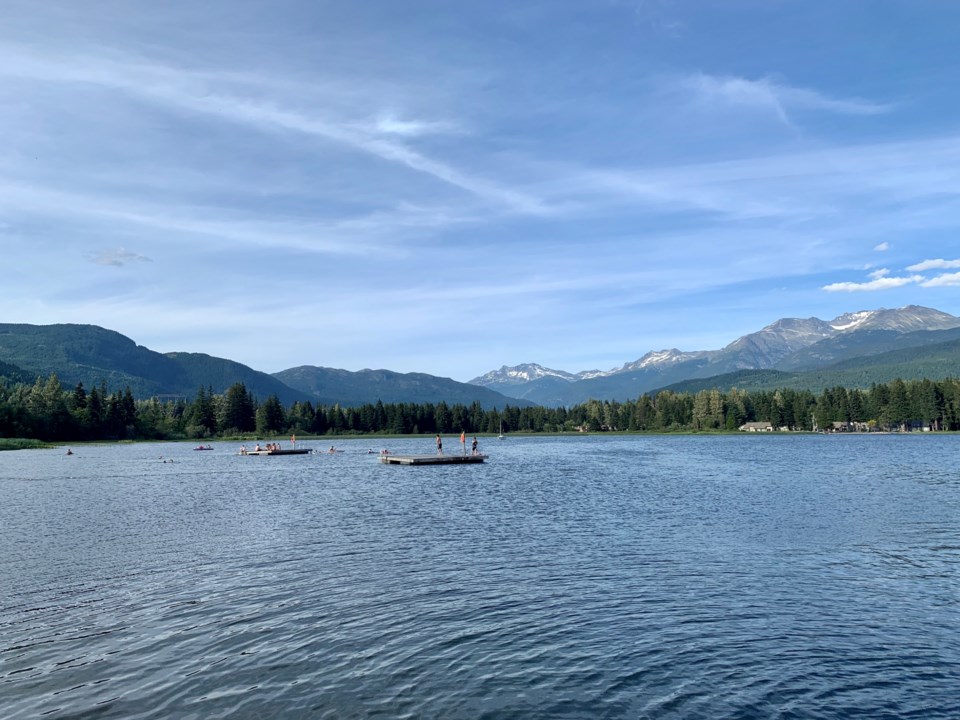 The floating docks at Alta Lake, as seen from Rainbow Park. Photo by Megan Lalonde

A 20-year-old Vancouver man has died after spending several minutes under the water in Alta Lake on Tuesday, July 28.

While bystanders managed to pull him to shore, according to witnesses, and he was rushed to hospital, Whistler RCMP said on Wednesday, July 29, that the man had died.

Vancouver resident Lina Serrano and her family were seated at a picnic table near the Alta Lake shoreline, enjoying the sunny afternoon at a packed Rainbow Park when she said she heard two young women calling out from the edge of the swimming boundary.

“They were holding on to the rope, they were waving and it sounded like, ‘Hey, hey!’” Serrano said.

She recognized the friends as the same group that had been occupying the neighbouring picnic table all afternoon, estimating the group’s ages to be between 18 and 22 years old.

“I turned around and I didn't see anybody at the picnic table beside me,” she said. “Then it looked more frantic when I seemed to catch their eyes.”

Serrano walked closer to the water. “And then I heard them and it was ‘Help.’ And that's when I said, ‘What?’ and then they said, ‘He hasn't come up from underwater.’”

Serrano began echoing the women’s calls for help until four men jumped in the water and began swimming towards the boundary rope. “The girls were saying, ‘Over here, over here,’ but they were pointing to the outer bounds,” recalled Serrano, referencing the lake’s floating docks.

Serrano said a witness who identified himself as an off-duty firefighter began asking for goggles, “and people just started chucking goggles at him.” After a few minutes of searching, that firefighter yelled, “‘We found him,’” said Serrano.

“A man had been counting, and he said ‘From the moment that you yelled help, it has been five minutes.’”

The firefighter was yelling for more help and more swimmers, “so that's when I let my [16-year-old] brother go,’” Serrano said.

She estimates around four more men swam over, as well as a paddleboarder. “I just could see them lifting his body up and putting him on the paddleboard, and between six to seven guys just pushed him to shore.”

The busy park was “quiet as could be.”

Serrano said witnesses began performing CPR, until police officers arrived and took over approximately four minutes later. She estimates first responders performed CPR for about 20 minutes, during which time she heard the off-duty firefighter state that they had found a pulse. Serrano said the man was then taken away by ambulance.

In a release on Tuesday, police said they received report of a man who was unable to be located after swimming in Alta Lake around 4:10 p.m. Whistler RCMP confir­med the man was found and treated by police and paramedics before being transported to hospital.

"Many people worked together to help locate and provide medical care yesterday afternoon and we want to thank everyone for all their efforts,” said Sgt. Sascha Banks in a press release on Wednesday. "Our thoughts are with the family and friends of the man."

Police ask anyone who witnessed the incident and has not yet spoken with RCMP to contact the Whistler detachment at 604-932-3044.

While Serrano said on Tuesday night that she and her family are anxiously awaiting word of the man’s condition and remain unclear about what exactly led to the distress, the scary incident is serving as a sobering reminder: “Don't underestimate the water.’”