Rapid accumulation of snow adds to potential risk of early-season conditions
Nov 27, 2016 7:10 AM By: Brandon Barrett 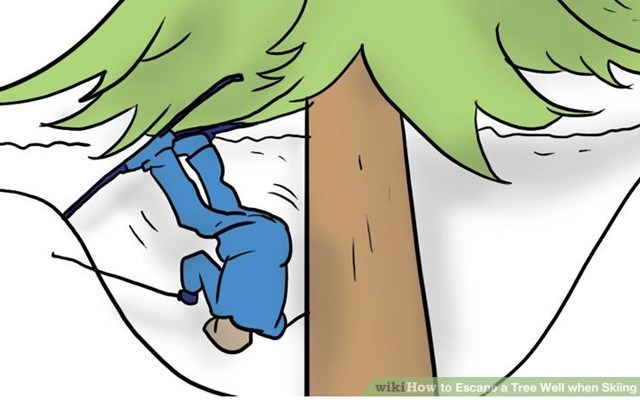 A screenshot of WikiHow's guide on how to escape a tree well. The full guide can be viewed here: www.wikihow.com/Escape-a-Tree-Well-when-Skiing. Screenshot

Whistler Blackcomb (WB) is urging skiers and riders to take the necessary precautions to stay safe in early-season conditions following the death of a snowboarder on Blackcomb Mountain Saturday, Nov. 26.

Without much of a snowpack in place before Opening Day, Whistler Blackcomb has been blanketed with 208 centimetres of snow in the past seven days, only adding to the risk factor, explained WB safety manager Kira Cailes.

“Basically what we’re dealing with is a very rapid accumulation of snow in a very short time,” she said. “Given that it’s early season, a lot of that snow is unconsolidated.”

That means hazards can be tricky to spot, and areas where there appears to be a deep layer of snow could be deceiving at first glance, Cailes said. Whistler Blackcomb marks hazards within its boundaries, but venture off-piste and you’re on your own.

“What we’re trying to reiterate is, despite all this snowfall, all the early-season conditions still apply and (people) still need to ski and ride accordingly within our recommendations, which is to stay on the marked and open runs where we’ve had an opportunity to actually give people fair warning of the hazards that are there,” added Cailes.

Tree wells, a void formed around the trunk of a tree covered in deep snow, are particularly dangerous following a quick snow dump, and can also be hard to identify. Whistler Blackcomb recommends several strategies to mitigate the risk of tree wells:

-Always ski or ride with a partner when going through a treed area, and keep them within eyesight and earshot so you know where they are at all times.

-Have a plan in place so you know when and where to reconvene with your riding partner. That way quick action can be taken in the event someone goes missing.

-If a partner falls into a tree well, stay with them and don’t leave to get help. Instead, use a whistle or yell for assistance.

-Never attempt to dig them out from above, as this increases the risk of suffocation, but instead determine where their head is and tunnel in from the side. Be careful not to knock more snow into the hole.

-Once you’ve retrieved your partner, immediately remove any snow from their airway and continue first aid efforts.

-If you fall into a tree well, yell or whistle to get someone’s attention. A transceiver, probe and shovel are also helpful tools to keep with you even within the ski boundaries.

-Do whatever necessary to keep your head above the snow surface, including rolling, grabbing a tree trunk or branches.

-If you become immersed, make an air pocket around your face and protect your airway. Stay calm and resist the urge to struggle. Use your cell phone to call ski patrol or 911.

With the rise of backcountry recreation and recent advances in snow-sport equipment, skiers and riders are venturing into more challenging terrain than ever before. As a result, Cailes said the mountain community has worked to educate itself on the dangers that tree wells pose.

“I do think there’s a greater awareness and I think there’s been a real effort on the part of the ski industry and just ski and snowboarding enthusiasts … to put forth more education about it. I think Whistler Blackcomb is not alone in their efforts to educate people,” she said.

Whistler Blackcomb’s safety message comes a day after a 27-year-old man died from a snowboarding accident in a gladed area of Blackcomb Mountain. The man was found unconscious and unresponsive near Arthur’s Choice, and attempts to revive him were unsuccessful.

Authorities have yet to release any further details on the incident or the deceased’s identity.

The tragedy struck just days after Whistler Blackcomb opened for the winter season.