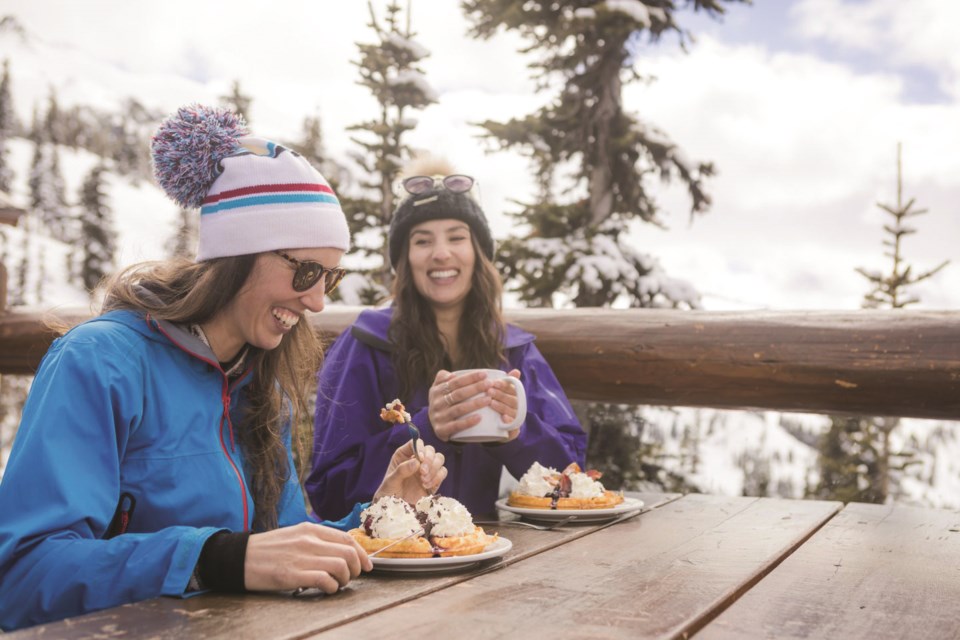 Local restaurateurs are considering a number of options for maintaining outdoor seating areas this winter—and none of them are an easy fix. PHOTO BY JUSTA JESKOVA / TOURISM WHISTLER

Whistler food and beverage operators are wrestling with how to make the most of outdoor seating areas this winter in the face of continued restrictions on capacity put in place to curb the spread of the novel coronavirus.

But while a similar move was welcomed recently by restaurateurs in the Lower Mainland, the reality of Whistler’s colder winter weather means there is no clear-cut solution for resort businesses hoping to maintain the expanded capacity they were granted this summer.

“It really is a business-by-business situation, depending on where they’re located and what type of outdoor space they have access to. Is it covered or is it not covered? Is it a strata or a common property? There are so many variables,” explained Eric Griffith, head of the Restaurant Association of Whistler (RAW). “There’s not going to be a one-size-fits-all situation.”

Municipal staff has spoken with several operators in recent weeks to get a sense of how they are planning to winterize their outdoor areas this winter. While no one indicated a willingness to erect a permanent structure, some are considering either a temporary building or tent structure, or a retractable awning, depending on their available space. The issue, however, is that any temporary structure greater than 10 square metres requires a building permit by provincial law, adding to the time and cost of the approval process.

Another challenge with any temporary structure in this part of the world is, of course, snow clearing.

“Snow is the enemy when it comes to structures,” Mooney added.

Heavy snowfall would require near-constant clearing of any tent-like structure, and then you run into potential issues around disposal, Griffith said.

“Once it comes down, it’s gotta go somewhere, depending whether you’re on private or municipal land. That’s the other consideration, but it’s something that can be managed and will require a little more thought and time.”

Whistler does have experience using temporary tenting in the winter months: Ahead of the 2010 Olympics, large, purpose-built temporary structures were erected around the village that were regularly manned by snow-clearers. The difference then, according to Councillor and long-time food-and-beverage operator John Grills, was “a lot of time was put in to making sure those were safe,” something local restaurateurs already feeling the financial pinch don’t have the luxury of this time around.

Restaurateurs are exploring the possibility of having a purpose-built, 10-m2 temporary structure that, with enough buy-in from operators, could be constructed en masse, driving down the cost, but it’s unclear if the investment would be worth it for such a small structure, Griffith said.

“A 10-square-metre place, if it was enclosed and heated, is really enough for about one table. How is that going to look?”

Some operators are considering the use of other non-traditional spaces to add seating, such as kitchens or common areas in a larger building, “but then, landlords will probably charge rent,” admitted senior municipal planner, Melissa Laidlaw. “Are there vacant spaces where somebody could do a pop-up? But again, what’s the cost of that?”

Joey Gibbons of Gibbons Whistler, which runs several local restaurants, bars and clubs, said the company is focusing more on “working with the elements—snow banks, ice bars” rather than building tent-like structures.

“The muni has been awesome to work with on that front,” he added. “Then we’re going to explore using plexiglass [to separate outdoor tables]. We’ll keep doing what we can do to try and gain as much capacity as we can so we can serve the guests and cut down on wait times.”

Heating is another factor in the equation, with the municipality recommending the use of electric over propane heaters to better align with its climate strategy. But even that could pose issues “because I think many of the buildings are already running at capacity when it comes to electric,” Laidlaw noted.

“The other thing is encouraging patrons to dress warmly.”

In June, the municipality streamlined the approval process for temporary patio extensions, ultimately greenlighting 18 applications. That raised Whistler’s capacity by 470 seats, increasing businesses’ average capacity from 42 to 54 per cent.