Local leaders share their thoughts ahead of election day 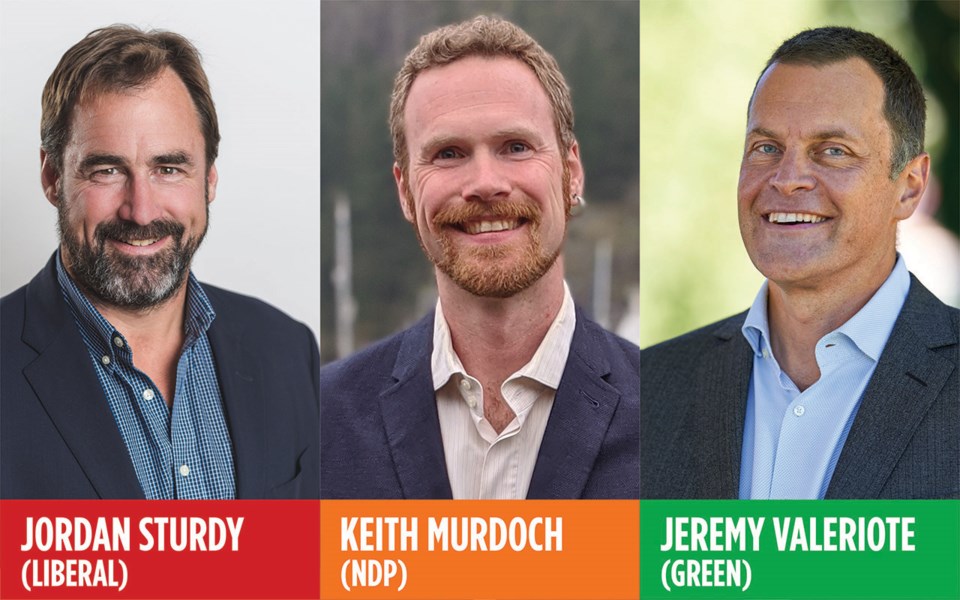 For all the anxiety tied to tourism recovery in light of COVID, it was notable that the first public question at Whistler’s all-candidates meeting on Oct. 15 was about B.C.’s opioid crisis.

“I think it’s a real representation of the strength of our own community, that we’re willing to ask those questions of these candidates very quickly when that floor opens up to a public voice,” said Jackie Dickinson, executive director of the Whistler Community Services Society (WCSS).

“[There were] lots of great questions around harm reduction and mental health.”

The candidates—incumbent Liberal Jordan Sturdy, the NDP’s Keith Murdoch and Green candidate Jeremy Valeriote—provided some “really great” answers to tough questions, Dickinson said (including two posed by WCSS: one related to enhancing food security and another about supporting women, who have been disproportionately impacted by COVID-19).

The pandemic has increased demand at WCSS, which is seeing more individuals seeking support for food security, financial assistance, and emotional and mental health, Dickinson said.

“Most family systems have had to have really hard conversations around how to maintain income and income earning, while having children in school or in daycare full-time,” she said, adding that, in most instances, it’s the woman who has to make the adjustment or change.

It’s important for the community to think about how it will support employees through Phase 2 of COVID-19, which will force people into their homes if they or a dependent becomes ill, Dickinson said.

“So we definitely wanted to foster those types of conversations, and really acknowledge that women, specifically, in workforces and businesses and organizations, are the most commonly hit,” she said.

“And there’s repercussions to that as well.”

A full video of the event is live on the Whistler Chamber’s YouTube channel.

Mayor Jack Crompton had the unique opportunity ahead of election day on Oct. 24 to sit down for one-on-one interviews with each of the Sea to Sky’s candidates (hear them yourself at whistler.ca/whistlerpodcast).

From Whistler’s perspective, the issues in this election are housing, climate action and improving life for British Columbians, Crompton said, adding that he asked all three candidates the same questions.

“They very much contextualized the issues and answered them from their point of view, and the point of view of their parties, which is what I found most interesting: when you’re considering the same issue, the approach that they’ll take is very much framed by who they are and [what] their party is,” he said.

“The theme that emerged was that the challenges that will be taken on by whoever our MLA is are very much the same.”

Asked if he feels any one candidate fits Whistler’s priorities better than the others, Crompton laughed.

“I am looking forward to working with whomever the voters elect for West Vancouver-Sea to Sky,” he said.

“The relationship with our MLA is a very important priority for myself and for council. We look forward to a strong working relationship moving forward.”

If Green candidate Valeriote is elected, that working relationship might include at least the perception of a conflict of interest, as Valeriote has been married to Resort Municipality of Whistler chief administrative officer Virginia Cullen for nine years.

But if elected, the conflict would be “minimal” due to the different natures of the roles (elected versus administrative), Valeriote said in an email when asked about possible conflict of interest.

“We are both professionals and are bound by the confidentiality and conflict of interest requirements of provincial legislation, and will follow these requirements to the letter,” he said.

Crompton offered a similar response, noting it is mayor and council’s job to interface with elected counterparts.

“CAOs perform their roles in accordance with time-tested and robust provincial legislation like the community charter,” Crompton said.

“When viewed through that lens, I don’t see a conflict of interest here.”

While all three candidates seem to understand the importance of Whistler’s tourism economy (which generates about 25 per cent of B.C.’s tourism export industry), there are “multiple levers” needed to generate recovery, said Tourism Whistler president and CEO Barrett Fisher.

“Especially small businesses, they’ve got their noses to the grind, they’re just trying to survive,” Fisher said. “Some of these programs, they have to have easier application processes. The eligibility criteria needs to be relevant and easy.”

Key to keeping B.C. tourism afloat will be generating new customer demand through targeted marketing and travel incentives, she added, noting that TW is focusing on advertising non-ski and mid-week activities.

“We need politicians who totally appreciate and understand the economic impacts that the travel and tourism industry generate, and how important they are to a variety of small, medium and large businesses that make up our communities, and drive local jobs and supports, “ Fisher said.

“But the solutions for recovery are multi-faceted.”

Like Crompton, Fisher wasn’t prepared to make an endorsement, though she did say it’s important for whoever is elected to engage local tourism stakeholders.

“That includes businesses, government, chambers of commerce, and tourism DMOs,” she said.

“All of the key stakeholders are part of the tourism recovery and tourism solutions, and we would like to see our successful local candidate and politician be well engaged.”

In response to a question from Chamber CEO Melissa Pace about support for small businesses rebuilding in the wake of COVID-19 at the Oct. 15 all-candidates meeting, Murdoch pointed to financial support and grants already provided by the current NDP government.

“This is the time for government spending in this area,” he said. “The debt that we’re racking up is important but absolutely necessary. Cutting taxes is not going to help us repay that debt.”

The BC Liberals have proposed to waive the PST for a year and eliminate the small business tax, among other measures, Sturdy said.

“We’ve got some loan guarantees for businesses in hospitality and tourism to help with cash-flow; we’re going to keep in place the wholesale pricing, and we’re working with the feds on a tenant relief package,” he said, adding that the Liberals will also ensure Resort Municipality Initiative funding stays in place.

With more than two-thirds of Whistler businesses saying they won’t have enough staff this winter, how will the candidates and their parties help the resort rebuild in the wake of COVID?

The labour question must be discussed in broader terms, Valeriote said.

“Housing is connected to absolutely everything, including social well-being and labour,” he said.

“As your MLA I would work with local governments and BC Housing to get the funding here to build the right kind of housing in the right places at the right time.”

The labour shortage is an “acute issue” given the extended border closure, Sturdy said, and the provincial government must work with its federal counterpart to get working holiday visa and other temporary workers back in the province.

“Ultimately I would agree with Jeremy that housing and transportation are key parts to ensure that we have access to the workforce wherever we can, but the workforce for Whistler in particular should be drawn from the region, and that means a quality transportation system is key,” Sturdy said, adding that it will also be important to continue to engage the “young and growing population” in Mount Currie moving forward.

Many of the workers coming from Australia or other places are unfamiliar with local labour laws, Murdoch noted.

“Certainly the main thing that I would do to try to create a long-lasting fix to this challenge is get involved and do an assessment of the provincial nominee program,” he said.

“I think there are great opportunities here for us to offer citizenship to maintain and sustain a workforce within the region, within Whistler.”

Judging by the submitted questions from the event’s 200-some attendees, climate change and other environmental issues have not been overtaken by COVID concerns in 2020.

A sizable portion of the queries were related in some way to Whistler’s natural environment, whether it be curbing greenhouse gas emissions, stopping old growth logging, the future of Woodfibre LNG, enhancing parks funding or ending subsidies for oil and gas.

“If the environment and climate change are your top issues … then the Green Party is definitely the party for you, and I’m your candidate,” Valeriote said, noting the influence the party’s three Green MLAs had on B.C.’s current climate plan.

“None of this would have happened without the Green Party’s influence in this minority government.”

On subsidies for oil and gas, Sturdy said he believes subsidies should be used to help industries get started, “and then at the end of the day we should be weaning these companies off of all subsidies, be it film and television, be it oil and gas.

“I think that we need to have a level playing field, at the end of the day, for industries right across the province.”

While both Sturdy and Murdoch talked about the various environmental and community processes attached to the Woodfibre LNG project in Squamish’s Howe Sound, Valeriote was the only candidate to outright oppose it.

“It’s not a good idea to reindustrialize Howe Sound,” he said.

“It’s the jewel of our region, it represents a whole host of potential for green economy and tourism jobs as well as just a beautiful natural asset, so Woodfibre LNG is a project that is not for the future. It doesn’t make sense; no, thank you.”

If there was one topic all three candidates found complete agreement on, it was the importance of establishing regional transit in the Sea to Sky corridor.

It’s an issue near and dear to Sturdy’s heart, and one he’s been actively working on for years.

“We put forward a proposal to the province, we had almost got it there, but unfortunately we had a change in government in 2017, and since then we just haven’t been able to find that funding formula,” he said.

The NDP wants a funding structure that will be sustainable over the long term, and the funding formula put forward by corridor communities last year included a fuel tax, Murdoch noted.

“So the NDP is committed to going after the gas companies who are gouging folks within the area [to] create room for a gas tax,” he said.

“I’ve already spoken to [Premier] John Horgan about this, he recognizes the importance, as do I, and if I’m elected, and the NDP forms government, it’s something we’ll be able to get done
no problem.”

Election day is Saturday, Oct. 24. Voting places within the Sea to Sky Corridor include the Whistler Conference Centre, Pemberton Secondary School, and the Ts’zil Learning Centre in Mount Currie from 8 a.m. to 8 p.m.